I’ll never buy a regular bulky beach towel again and neither should you. This past summer I was introduced to a Turkish towel and it’s changed my entire towel game forever.

The secret lies in the cotton with which Turkish towels are made. Turkish cotton is not heavy, which means it isn't as bulky as traditional towels. The material itself is a byproduct of Turkey's unique climate, where cotton grows differently than in other regions of the world.

The fibers of Turkish cotton are longer and stronger than most other types of cotton and are smooth and super absorbent. These towels also serve as an important fixture of Turkish history. First woven in modern day Bursa in the 18th century, as the Ottoman Empire expanded into Turkey.

Sultans of the empire and their subjects used these special towels in the hammam (Turkish bath) and in their everyday lives. Ancient Ottoman tradition dictated that couples give each other a bath set when they decided to marry, with Turkish towels being the key piece.

Why Turkish Towels Are the BEST

The light cotton fabric means the towels aren’t bulky or heavy and can be easily packed into a beach bag or in a carry-on. Nowadays, I always travel with a Turkish towel in my carry-on as they can double as a blanket or a scarf. In the past, I would have never dreamed of traveling with a towel and didn’t realize how heavy towels were until I compared them to the lighter Turkish towel.

Secondly, these towels dry very fast! After a walk on the beach, I can return to a mostly dry towel, meaning no more sitting on a damp towel. Fast-drying magical powers also keep the towel free from moldy smells. The cotton just feels better over time with repeated laundering. Lastly, the design and colors seem super modern and fun, but in reality, much of the same designs and patterns have been used for centuries.

Where to Buy Turkish Towels

Just because something says it’s a Turkish towel, doesn't mean that it is one. Check the fiber content of the towel to ensure it's made with 100% Turkish cotton. Buy these beauties everywhere from Amazon to popular home brands like Serena and Lily and West Elem. 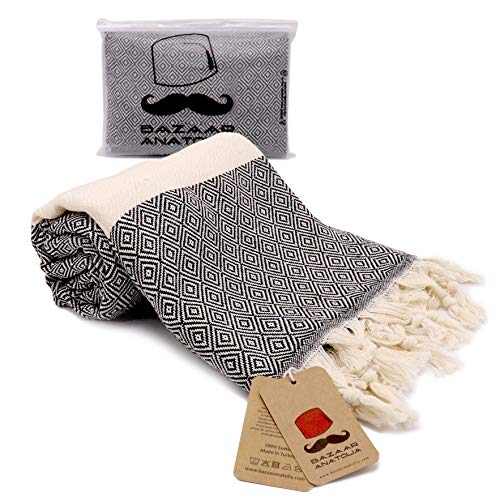 "The Bazaar Anatolia Diamond Turkish Towel was my first Turkish towel. I loved it so much I bought five more just like it for our upcoming trip to the beach"—Oola Editor Ellen

"My mom gifted our whole family these with our initials for Christmas last year. It’s all she uses anymore. The Land’s End brand is always great quality with fun patterns."—Oola Editor Ellen

Not only are Smyrna Turkish towels SO soft (probably because they are hand-loomed in Turkey with 100% natural Turkish cotton), but they are also gorgeous. I use them as a blanket, scarf, or as an actual towel when I travel."—Oola Editor Laura

"West Elm has long been my home goods crush. These gray tassel towels have been the perfect addition to my bathroom. I cannot stress how much I LOVE these bath towels."—Oola Editor Sarah